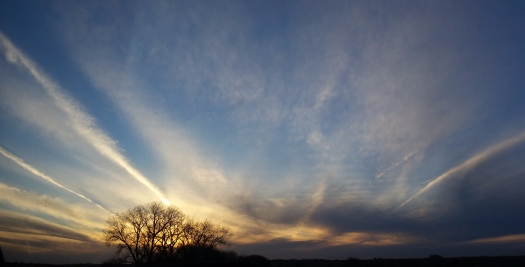 “She is traveling incognito to meet a lover.”

The girl’s eyes narrowed as she turned, considering the woman with her head turned toward the window. Large sunglasses shielded her eyes. Shadows flicked across her like action at a movie.

“She has just heard that her mother is ill,” the girl replied. “She is rushing to be at her deathbed and the train moves too slowly for her.”

As if in response to her words, the rhythmic clack of the train’s steel wheels slowed. A “Bahnhof” sign flashed by.

“A ha!” Triumph. “This is the station. Her lover anxiously awaits her. He’ll jump to the door before the train stops.” The boy laughed, “They’ll continue on because people would know them here. Of course they’ll continue traveling incognito.”

“Then he won’t meet her here in the car either.” The girl sucked on her teeth. “You’re tricky. We can’t be sure if you’re right because we won’t see him. People might know him.” Then: “Besides, this stop is just a delay because she’s rushing to her dying mother.”

Both watched as the woman stood and stretched, cat like. She slid her purse over her shoulder and struggled with a small suitcase above her seat.

The boy began to rise.

She pulled the suitcase down. It perched on wheels. She kept the purse and suitcase on her left side and carried a brown paper bag on her right. She took small steps to reach the door as the train slowed.

When it stopped, the woman twisted the handle and the doors gave with a burst of breath. She dropped the suitcase on the platform and climbed down behind it. A white “Kaiserslautern” sign with black letters loomed in front of her.

The boy and girl craned to watch out the window.

A child printed to the woman, hitting her at full tilt and tipping her off balance. She dropped her purse and bag. She flew the child in circles over her head and a tall man in sunglasses caught her from behind. For a moment, the train window framed them: a snapshot. A Norman Rockwell painting.

The girl looked at the boy and his lips almost smiled.

“I guess we were both wrong?” she offered.

“Her lover could have a child.”

“Just drop it. We were wrong.”

She reached for her book, hissing a sigh. She slumped back on the red, orange, and yellow horizontal stripes to read. Her feet were on his seat, opposite her, between his legs. She studied his face for a moment and then, “You can’t stand to lose, can you?”

“I’m just saying her lover’s wife may have died of cancer, leaving him with a young child who adores her,” he said.

“So you just assume everyone lacks morals since you did?” she asked. “Why a lover?”

The boy now sighed. He scavenged for his own book. “Look, it was just a game. And I promised you; I won’t make that kind of mistake again.”

“Did this woman look like her?” She couldn’t keep herself from continuing.

“You don’t want to know what she looks like.”

The train clacked across the rails, first like a roller coaster working up an incline, then smoother.

“Why are you bringing this up? Why now? We’re on vacation. We’ve already talked about this.”

“I don’t know if I should have come on this vacation with you. When we play the Stranger Game, you’re always coming up with clandestine lovers’ trysts.” She looked out at the speeding trees blurred like Monet had taken a brush to them.

“I thought you loved my imagination? Why do you want to spoil our vacation? We’re having fun.” He searched for his place in the glossy paperback.

“See what I mean? If talking about this spoils our vacation, maybe we shouldn’t be here together.” Her finger marked her place in her hard-backed book.

“Too late, my friend. We’re on a train and you don’t speak a lick of German.” The boy continued to flip through his book and settled on a page. He unzipped a taut side pocket and jerky appeared in his hand. “I think this is the last of it. You want some? You can’t get it here, you know?”

“Don’t think you can change the subject.”

“I’m not changing the subject. I was just telling you we’re low on jerky.” He zipped the pocket.

“If you don’t think that seeing exotic lovers’ rendezvous in every stranger we see is a problem, we’ve got a problem.” Her voice pitched shriller.

“We had a problem. We talked about it. It’s not going to happen again. Just because I make up stories doesn’t mean I want to act them out.” He bent the cover back to hold the book in one hand, breaking the spine. “Can’t we talk about this at home?”

“If you think something this serious can wait, then you have a different perspective on this relationship than I do.” The book was clenched between her hands. Damp spots appeared on the cover.

“We’ve been having a good time on this trip so far, right? Right?”

“We went to Paris and kissed at the top of the Eiffel Tower. We saw the frickin’ Mona Lisa. We hunted down the Rodin museum. We’re building memories here. We’re making our own new history.” His eyes fixed on her.

“What does a ‘new history’ matter when the old one won’t go away? When are you going to the one traveling incognito to meet a lover.

“We’ve already discussed this,” hissed through clenched teeth. “If you can’t leave it behind us, I can’t help you.” He crossed his arms in front of his chest, book in his left hand.

The girl fumbled with the pockets in her backpack. A drop like rain darkened the blue polyester. She crammed the book in. The pages crumpled. She focused on her task. “If you won’t talk to me about this now, I’m getting off at the next stop.”

“Honey, you don’t want to do this.” He unfolded his arms, leaning forward on his knees with his elbows, holding his face in his hands, book framing the left side.

“Is that all you have to say? If your next sentence doesn’t address this issue in some purposeful way, I’m gone.”

The rhythm bumped steadily. He leaned back in the seat and crossed his arms again. “I’m not going to have this argument with you; not now.”

She untangled her legs from his and rose. As she reached for her backpack, the track curved. She dropped on the boy’s lap.

Eyes. Green flecks of gold. Dark lines like stars shooting out from the pupil. Red capillaries. She pushed off his chest and stood.

She shouldered the backpack like a Sherpa facing Mt. Everest. His hand guided the strap over her right shoulder. He was standing behind her. She carried her fanny pack in her left hand. She swayed with the train, her steps small.  She jerked the handle and the doors wooshed open. They automatically shut behind her backpack. She jerked the next handle and entered the new car.

She found a seat close to the door and leaned her face against the window.  These seats had blue, green, and aqua horizontal stripes. She leaned back against the slowing motion and reached for her backpack. Her face left a steamy silhouette on the glass.

The boy was 10 pages from the last page he had chosen when he noticed that the rhythm had stopped.  He looked out the window. The girl stood with the “Landstuhl” sign in large black letters on a white background behind her. She was framed in the window: a snapshot for Outdoor magazine.

The trains started up again. She met his eyes—wider now. He scrambled out of his seat. She turned away. The small awning shaded her. Angled to her right, away from the brick stationhouse was a white cow with black spots. It was chewing its cud. On her left was a red-roofed house with red, white, and purple flowers in the window boxes. She was alone. He had the guide book.

She hiked down the stairs and through the dark tunnel towards the bright brick stationhouse. The train’s whistle blew. The wheels’ rhythmic clack faded.