I’ve been thinking a lot about bodies lately. Something so many of us do surprisingly little consider we’ve all got one. Mostly my contemplation emerges from reading women writing about their overweight bodies.  I’ve been researching for the essay I’ve been writing on my own unruly body; a body that was difficult to mold into Air Force standards. What I initially learned from this research was that I’m not fat enough to write about fat.

No question, the cuts are deepest for people who cannot escape their physical appearance. For my authors, that is obesity and morbid obesity. It can also be gender. It can be race. It can be height. It can be an extra-large nose. One eye differently colored than the other. A perception of difference.

Just today I lamented to my husband that I had seen skinny people who eat so much more than me. Later, reading Lindy West’s Shrill, I learned that there really is research that shows that struggling with weight isn’t as simple as “calories in/calories out.” And we all know that, somewhere inside, yet it was reassuring to find my sessions with a dietician whose horrified exclamation, “But you can’t eat less than 1200 calories a day,” was followed with my perfectly kept food diary and weight gain on her fiber-rich, calorie-low diet. Despite the personal trainer and the perfect diet, I put on weight that was not muscle.

My sense of kinship with obese authors makes no sense to me yet.

What I do know is that my affinity is most strong when they write about how other people feel justified shaming someone else’s body for perceived moral shortcomings resulting in their “problem.” When other people feel righteous about telling other people how to live their lives, maybe they should more time looking at their own lives. Like someone suggesting I’ll burn in hell because I love a glass of wine, where do the critics get the right to tell people what they should do with their bodies?  I would like to take your average white male troll who tells a woman her body is disgusting because she doesn’t match an unrealistic, male-driven ideal of beauty and remind him that if he could just grow a few inches taller, he might match my own unrealistic conception of beauty.  And until he does, to take his comments elsewhere.

This one goes against the grain. Let people make their own choices. And if those choices do not result in a thin body, don’t denigrate them for that. The worn-out arguments about health and self-worth really do not apply. Perhaps if we fixed our broken industrial food system and American “overwork” ethic, we could have a tiny start in making changes that really matter.

I’m not fat and I am interested in being strong and fit. But I would like to fight for the right to be fat without ridicule. My retirement, only about five months ago, from military standards of fitness has allowed me to loosen my grip on my disobedient body. What I’m finding is that it really isn’t so disobedient. It’s older now. It hurts more as I struggle to improve my cardiovascular fitness and muscle strength so I can join my brother for a couple hundred miles of his Appalachian Trail Thru Hike next spring.

But it’s also pretty great. It grows stronger with my work. It carries a load. It can run. And even though it looks different than that younger version I used to despise so much for its smooth muscles and tight arms that seemed to be mounds of unwanted fat at the time, I’m finding beauty in its unexpected willingness to conform to my demands after all.

Most of us have heard of love languages. My body has a love language—one that I think more of us would benefit from embracing. My body wants to be accepted for what it is by its own standard. If I set aside the images bombarding me from all sides, from the waif a strong wind could blow over to the power athletes nearly all pure muscle, and try to picture my body, independent from the others, I begin to see a beauty in a place that has only known a struggle.

For more than 49 years, the gaze coming back at me in the mirror has not wavered. The same eyes take in the same flesh. That is nothing short of a miracle. The flesh expands as it needs to accommodate life and the inevitable changes of age. As the browns emerge on my hands, the puckers evolve on my thighs, and my belly softens into a pouch, there is beauty in the colors and the shapes that make up me. Because they are me. Because there is only one that is me.

I’m learning to sing a song of love in my body’s language. 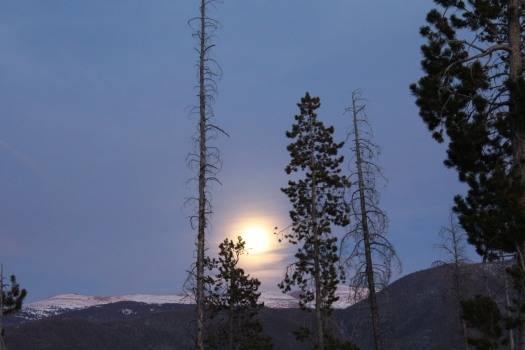 An orb ascending in the vast
Infinity of space.

Nothing infinite about this space.

Fake?
It’s all too real.
History unraveling before me.

There’s nothing new under the sun.

Then the remote glow breaks
Over peaks, higher than you.
Higher than me. Higher than this.

Is it too much to hope for,

Something new?
Under the new, full moon?